“I continue to be overwhelmed at the popularity and success of this effort,” said Chief Hart. “More than half of the Department participated to raise money for this very worthy cause. I would like to thank each of them, especially Presidents Appello and Birch, for their incredible generosity.”

A donation in the amount of $5,000 was presented to Men’s Health Network (MHN), a national non-profit organization whose mission is to reach men, boys, and their families where they live, work, play, and pray with health awareness and disease prevention messages and tools, screening programs, educational materials, advocacy opportunities, and patient navigation. Learn more at menshealthnetwork.org

MHN Vice President Ana Tomšić, who received the donation on behalf of the organization, stated “Men’s Health Network thanks the Linden PBA Local 42, the Linden Police Superior Officers Association, and the Linden Police Department for their generous support in raising awareness of the important issue of men’s health this November. Especially with the current situation in our society as it is, there is plenty that we can do to help raise awareness and promote good health among our family, friends, and colleagues from afar. Keeping healthy means that communities (both personal and professional) will thrive for a long time.”

The Department will build on this success and continue their fund raising efforts by participating in “Double-Down December.” Grooming standards will continue to be relaxed through the end of the year for participants who make a second matching donation. Monies raised in Double-Down December will be dedicated to host a community event later in the month, and any remaining monies will be donated to St. Joseph’s Social Service Center in Elizabeth, NJ.

Members of the public are invited to participate. Checks or money orders made payable to Linden PBA Local 42, RE: DDC will be accepted at the Police desk any time during the month of November. A receipt will be given for each donation, but unfortunately CASH DONATIONS CANNOT BE ACCEPTED.

Newark residents Walir Reynolds, 30, and Janiyyah Jones, 25, have been arrested and are facing weapons charges after Police recovered a handgun during a motor vehicle stop.

Police allege that they observed the vehicle speeding along Route 1 just before 9:30pm on Thursday, November 19, 2020. Officers stopped the vehicle, and a subsequent investigation led to the recovery of a handgun from inside the vehicle. Reynolds and Jones are charged with second-degree unlawful possession of a weapon.

“This is the twelfth illegal gun we have seized this year,” said Police Chief David Hart. “We will continue to pro-actively work to take these guns off our streets.”

Reynolds and Jones were both remanded to the Union County Jail pending an appearance in Superior Court.

After raising $5,000 for Men’s Health Network (MHN), the Department will continue to relax grooming standards and allow Officers to keep their beards through the end of the year. Money raised in Double-Down December will be dedicated to host a community event later in the month. Any remaining monies will be donated to St. Joseph’s Social Service Center in Elizabeth, NJ.

“No Shave November has been a very successful fundraiser,” said Chief Hart. “Building off of that success with Double-Down December to benefit local families is a no-brainer, especially while so many of our friends and neighbors are struggling.” Participation is voluntary, and donations may be made without participation. Members of the public are invited to show their support by making a donation.

Checks or money orders made payable to Linden PBA Local 42, RE: MHN will be accepted at the Police desk any time during the month of November. A receipt will be given for each donation, but unfortunately CASH DONATIONS CANNOT BE ACCEPTED.

A local business has partnered with the Linden Police Department to make significant traffic safety improvements along a heavily-traveled street.

Rosedale & Rosehill Cemetery, located on E. Linden Ave, has operated in Linden for over 100 years. Linden Ave, which was once just a dirt road, has become a major thoroughfare within the city; it is one of only four roadways that directly connect Park and Wood Avenues with an estimated 8,000 vehicles that travel on it daily.

The Cemetery has maintained a vehicle crossing to transport materials and equipment from their offices across E. Linden Ave to the cemetery since 1998. Over the years, the volume and speed of traffic has dramatically increased. In 2019, Cemetery President, Jim Koslovski became worried for the safety of his employees, residents and surrounding businesses and contacted the Police Department to see what could be done. “The Linden Police Traffic Bureau was very responsive to our concerns and we immediately began the process of developing a comprehensive plan to make the street safer,” said Jim.

New parking restrictions were adopted to improve visibility leading up to the crossing, and new signs were installed to make sure drivers were aware that vehicles could be crossing. A large portion of the work was delayed due to utility work, but last month the road was finally repaved thanks to a grant from the Union County Infrastructure program, and striping was added between Carteret St and Willow Glade Rd to reduce illegal parking violations and reduce speeding. Rosedale & Rosehill Cemetery generously contributed over $18,000 to make sure that the improvements were made without impacting the city’s budget.

“Safety is a priority for our employees, clientele and the citizens of Linden”, said Jim. “We have seen a reduction in speed, increased awareness by drivers as they travel along Linden Avenue as well as adhering to the posted speed limit. I personally want to thank Mayor Armstead, The Linden City Council, Councilman Roman, Chief Hart, Lt. Guenther, Sgt. Oliveira and the City of Linden Engineering Department for their support, time, and effort in helping complete this very important safety project.”

“We have seen very promising results from these improvements thus far,” said Linden Police Chief David Hart. “Unfortunately, funding is not always available to experiment with traffic control measures like these, so we are very grateful to have a generous and invested partners like Rosedale & Rosehill Cemetery.”

Officers will continue to monitor the area over the next year, and similar measures could be implemented in other areas if the results prove to be successful.

Linden – Chief David Hart announced today that the Linden Police Department has entered into an agreement with LexisNexis to offer community members an easy-to-use service to file or request online reports.

“We want to make sure that the process to make and/or request a Police report is as simple and convenient as possible,” said Police Chief David Hart. “Since the start of the COVID-19 pandemic we have seen an increasing demand to minimize the need for in-person reporting of minor incidents.”

The service provides community members with a quick and efficient way to report a variety of non-emergent incidents, such as harassing phone calls, identity theft, lost property, theft, traffic complaint, vandalism, and violations of a child custody agreement without coming to Police Headquarters or having an Officer in their home.

“This service will not only reduce the risk to Officers and the public as it relates to COVID-19 and other diseases, it allows us to more efficiently utilize our resources by reducing the demand for Officers to document minor incidents, giving them more time to focus on stopping criminals,” added Chief Hart. 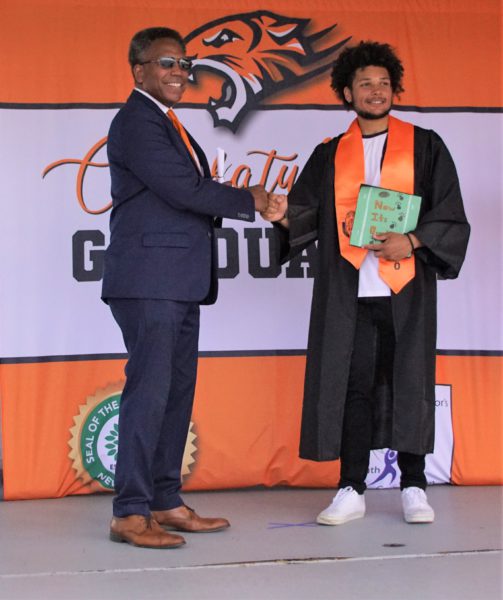 Santa’s schedule has changed due to weather conditions, and will be traveling through Linden on Sunday, December 6th and Saturday, December 12th from 12pm to 4pm.