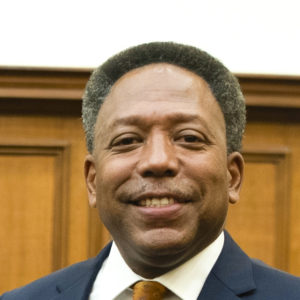 Mayor Derek Armstead brings a wealth of governmental experience, as well as community leadership to the great City of Linden.

Armstead was elected to the Linden City Council served the constituents of the 4th Ward from 1993 through 2014. During his tenure he has served on various committees, including the Personnel and Finance, Accident Review, Affordable Housing and Redevelopment, Central Dispatch 911, Clean Communities, Engineering, Fire, Shade Tree Commission, Linden Landfill, Public Works, Real Estate and Cable, Recreation-Building & Grounds, Public Property, Revenue Enhancement, Transportation and Parking, Weights & Measures and Licenses & Permits. He was the liaison to the Board of Health, the Mayor’s Youth Commission, the Linden Board of Education and the City Council’s representative on the Planning Board.

Armstead is a life-long Linden resident, whose family has lived in the city of Linden, for almost 100 years. He graduated from Linden High School in 1979, and attended Union County College where he studied Computer Science. He started his career in technology at Prudential Insurance Company where he worked in the Computer Operations and Telecommunications Division. Armstead is currently employed as a programmer for the Union County Data Processing Department.

He is a strong advocate of fairness, equal educational and economic opportunities for all Linden residents.

Community Leader
Serving the Linden Community especially our youth has always been his passion.

Armstead’s life has been shaped by this quote from a Scottish political economist Adam Smith told to him by his grandmother: “The disposition to admire, and almost to worship, the rich and the powerful, and to despise, or, at least, to neglect persons of poor and mean condition is the great and most universal cause of the corruption of our moral sentiments.”

Despite having 12 children of their own, his grandparents took in and cared for other children in need in the community. Armstead followed in his grandparents footsteps, not only mentoring displaced youth but welcoming them into his home. He served on the board of trustees for many years for the Linden Pop Warner Organization, which provides fun athletic learning opportunities for children while emphasizing the importance of academic success.

Armstead Scholarship Program
Mayor Armstead believes that investing in our youth just as his grand-parents and parents did is a great investment in our future. Together with his wife, Danie Orelien, an award winning teacher honored by the NJTESOL/NJBE Executive Board for her advocacy efforts on behalf of English Language Learners and his sister Lisa Ormon, a member of the Linden Board of Education, founded the Armstead Scholarship Fund. According to Mayor Armstead, “Without a quality education, not only do our young people have less access to job opportunities, but are more likely to be involved with the criminal justice system.” Over $20,000.00 in scholarships monies have been awarded to graduating seniors from Linden High School. See  Articles:
http://njtoday.net/2013/10/04/armstead-scholarship-winners/
http://njtoday.net/2013/09/17/photo-linden-scholarship-winners/
http://njtoday.net/2013/05/13/orelien-armstead-honored-for-excellence/
http://njtoday.net/2011/02/15/linden-teachers-win-advocacy-award/

It Takes a Village
Inspired by the old African Proverb, “It takes a village to raise a child,” Mayor Armstead and his wife founded the Citizens For A Better Linden and Project Helping Hands. Project Helping Hands held successful campaigns to provide families in need with food, clothes and holiday gifts. In January of 2013, Mayor Armstead joined Americans from all across the country in answering President Barack Obama’s national call to service initiative. Volunteers registered online for the Linden event using the Presidential Inaugural Committee’s National Day Of Service website.

The young people who participated in this community project learned the importance of community service and how their actions impact other families. Armstead and his wife believe that the entire global community needs to work together in order to eradicate youth violence, crime, and poverty in our society.

In November 2013, Mayor Armstead through Project Helping Hands, adopted the Rivera-Rodriguez family for the holiday. According to Armstead, holidays are a wonderful time to give back to the community. Once Mayor Armstead found out about the children’s medical needs and financial hardship, he organized a successful Thanksgiving luncheon to benefit the family.

DON’T TRASH IT, JUST CAN IT CAMPAIGN-
Mayor Armstead initiated a campaign called, Don’t Trash it, Just Can It. Mayor Armstead teamed up with local community organizations to organize a city-wide Clean-Up event. Mayor Armstead is hoping other residents will do the same, considering the city has 55 homes abandoned due to foreclosure, and an overworked Department of Public Works that has 37 parks to maintain during the summer months.
http://rennamedia.com/wp-content/uploads/2013/10/LinSept13.pdf
http://unionnewsdaily.com/news/linden/5878
http://njtoday.net/2013/08/20/linden-anti-litter-campaign-gains-supporters/

Mayor Armstead believes in a government of the people, for the people by the people. His grandparents taught him that when the government fails and neglects the need of people, it is our duty and responsibility as leaders as to stand up for the people.
Mayor Armstead waged his own insurgent primary election campaign in 2010, to become the first African–American to win the Democratic nomination for Mayor in the City of Linden. In 2014, he waged successful contested campaigns in both the Democratic Primary and General Elections for Mayor.

Although there are no easy answers, Armstead’s plan calls for the stabilization of taxes, an aggressive effort to reduce violent crime, economic stimulation for , jobs creation and Linden’s business vitality plus the streamlining of municipal government operations.

Mayor Armstead lives with his wife and children Erika, Brianna, Ryan, Ashton and Abigail. He is very civic minded and lives by the premise that there is no exercise better for the heart than reaching out and lifting people up.