The Union County Board of Chosen Freeholders, the Village Super Market of Springfield Township, and Gargiulo Produce are providing this walk up only food distribution event to all Union County residents affected by COVID-19 on Tuesday, April 13, 2021 @ 10am.

Click here to view and/or download the event flyer in English and Spanish. With any questions, or for more information, please email the DHS Action Line or call them at 908 558 2288.

One person’s organ and tissue donation can save up to eight lives, and enhance over seventy-five lives. Please watch the video below for more information, and for how you can take an active role in organ donation.

The Recycling Center @ 2 Donaldson Place and Bulk Trash drop-off at the DPW complex will be closed Friday also, but will reopen as usual on Saturday, April 3rd.

The Union County Board of Chosen Freeholders, the Village Super Market of Springfield Township, and Gargiulo Produce are providing this drive up only food distribution event to all Union County residents affected by COVID-19 on Saturday, April 3, 2021 @ 8am.

Click here to view and/or download the event flyer in English and Spanish. With any questions, or for more information, please email the DHS Action Line or call them at 908 558 2288.

To find a COVID-19 vaccine and check appointment availability, you can click here and use the Vaccine Finder website. Links to this have also been placed in the COVID-19 header menu and the How Do I menu.

The International Rescue Committee (IRC) is holding free online ESL (English as a Second Language) Classes through Zoom. A smartphone, computer, or tablet is needed and most classes will meet twice a week for 90 minutes each. Classes start on April 12th and run through June 6th.

There will be Tenants Rights Virtual Sessions held in English and Spanish by PROCEED Inc. in partnership with Central Jersey Legal Services. The virtual session in English will be held on Tuesday, March 30th, and in Spanish on Wednesday, March 31st. Both sessions will be held from 11am until 12pm.

The CDC has shared helpful information on common side effects, tips to reduce discomfort and scheduling your second shot, along with a printable handout you can bring to your vaccine appointment. Please feel free to share the PDF attachments below with your friends, family, co-workers and community members. Visit the CDC website for additional resources.

Lawrence Thomas, 29, of Plainfield and Travis Price, 28, of Linden were arrested and are charged with first-degree robbery for their alleged role in a convenience store robbery.

On February 21, 2021, at approximately 10:15pm, Linden Police Officers responded to the 7-Eleven store located at 1832 E. St. George Ave on a reported robbery. An initial investigation indicated that the two suspects entered the store, at which time one of the suspects walked behind the counter and ordered the clerks to empty the register. The second suspect, who remained near the entrance to the store, allegedly lifted his shirt in a manner that suggested that he was in possession of a weapon. The suspects then fled the scene on foot. The clerks, a 32-year-old man and a 44-year-old woman, were not injured during the incident.

A subsequent three-week joint investigation by the Union County Prosecutor’s Office Major Crimes Division, Linden Police Detective Bureau, and Elizabeth Police Department identified Thomas and Price as the suspects and resulted in the charges. The Union County Sheriff’s Office Crime Scene Unit, along with members of the Union and Roselle Police Departments, also assisted in the investigation.

“Cooperative partnerships between members of the community and among various law enforcement agencies is an essential part of any successful criminal investigation and prosecution,” said Linden Police Chief David Hart. “We are appreciative to our law enforcement partners for their help in this case, and we applaud the courageous victims and witnesses who have taken a stand to condemn violence in our community.”

The defendants were arrested without incident on Thursday, March 11, 2021. Thomas surrendered to Police at Linden Police Headquarters and remanded to the Union County Jail pending an appearance in Superior Court.

As part of an ongoing capital investment project, our crews will be installing new equipment within our Raritan-Millstone Water Treatment Plant, which supplies the water to your area. Weather Permitting, the project will start on Tuesday, March 23rd and should be completed on Thursday, March 25th. During the project, you may experience discolored or cloudy water, or low water pressure. If your water is discolored, run the cold water taps only, at the lowest level of the house for about 3-5 minutes until the water runs clear. You will receive another notification should additional action be required, conditions change, or when repairs have been completed. If you are a landlord and water service is in your name, please inform your tenants so they are aware of this potential impact to their water service. For more information or to see a map of the affected area please click here or call 1 800 272 1325. We apologize for any inconvenience and appreciate your patience while our teams complete this important work.

The Mayor’s Youth Commission is proud to accept donations for the 2021 Linden High School Graduation Celebration.

Click here to donate toward the 2021 LHS Graduation Celebration. 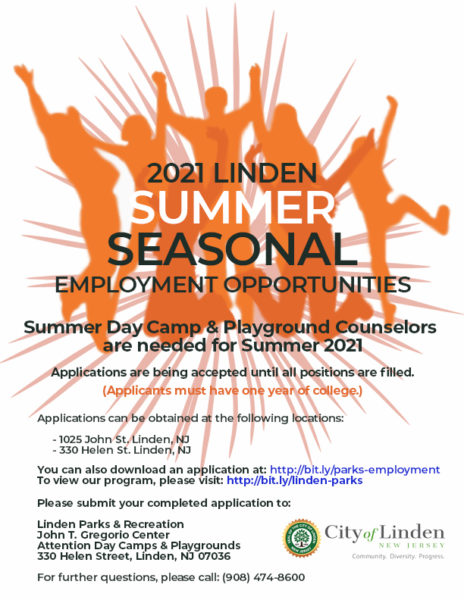